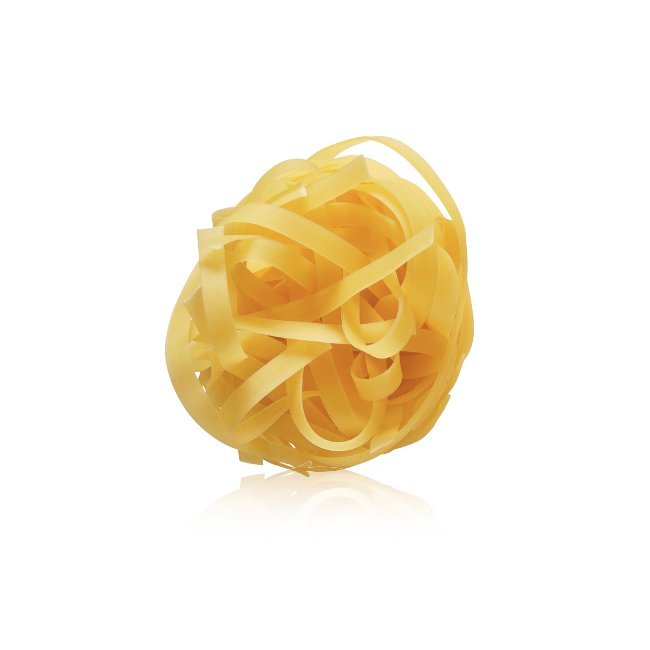 History has it that this pasta shape was created at the end of the 1400s for the wedding banquet of Lucrezia Borgia of Ferrara and Giovanni II Bentivoglio Lord of Bologna, by the royal chef tasked with preparing a special recipe. Probably inspired by the bride’s long blonde hair, the chef cut the traditional Bolognese lasagne pasta into ribbons and created tagliatelle.

Given its history, the name tagliatelle clearly comes from the Italian verb tagliare, “to cut”. The new shape was created by cutting lasagne, the classic egg pasta sheets, into long golden ribbons.

People in Bologna conceive only one way of making tagliatelle and in fact, in the 1970s, to avoid the association between tagliatelle and spaghetti “alla Bolognese”, the city’s Italian Academy of Cuisine delegation deposited the official recipe and measurements for tagliatelle at the Chamber of Commerce in Bologna.

The width of tagliatelle pasta should be the same as the 12,270th part of the Asinelli Tower in Bologna, i.e. 7mm raw, and 8mm cooked. Nothing is said about the thickness, but traditionally it should be between 0.6 and 0.8 mm.

Overtime, a tagliatelle verdi (“green tagliatelle”) version was added to the classic recipe. Green tagliatelle pasta is made by adding chard or spinach to the dough. A more unique recipe uses nettles instead.

Tagliatelle originated in Emilia Romagna, but over the centuries every region has created its own peculiar version.

For example, fettuccine in the central region of Lazio, tajarin in Piedmont, tagliatelle with wild boar and mushroom ragu sauce in Tuscany, duck ragu sauce in the Marche region, and a version with beans, “pasta e fasoi”, in Veneto.

Tagliatelle is a type of fresh egg pasta originally from the city of Bologna, in Emilia Romagna.

Tagliatelle can be paired with a variety of sauces, from classic Bolognese sauce or ragu sauce with no tomato, to combinations such as radicchio and speck or Parma ham and asparagus.

2. Cooking with a lid will save time and gas or electricity and the water will boil sooner